What is Blade vs. Bladeless LASIK?

One of the most important aspects of the LASIK procedure involves the creation of a corneal flap. This flap is made along the surface of your cornea, and it provides the laser with access to the underlying corneal tissue which needs to be reshaped. After the procedure, the corneal flap is replaced and will gradually seal as your eyes heal.

Traditionally, a microkeratome blade was used to create the corneal flap. This surgical instrument contains an oscillating blade that creates a hinged flap along the surface of your cornea. However, advances in LASIK technology now allow for this flap to be created by a femtosecond laser. While you can receive excellent results from both methods, there are important differences between flaps created by a laser vs. a microkeratome blade. 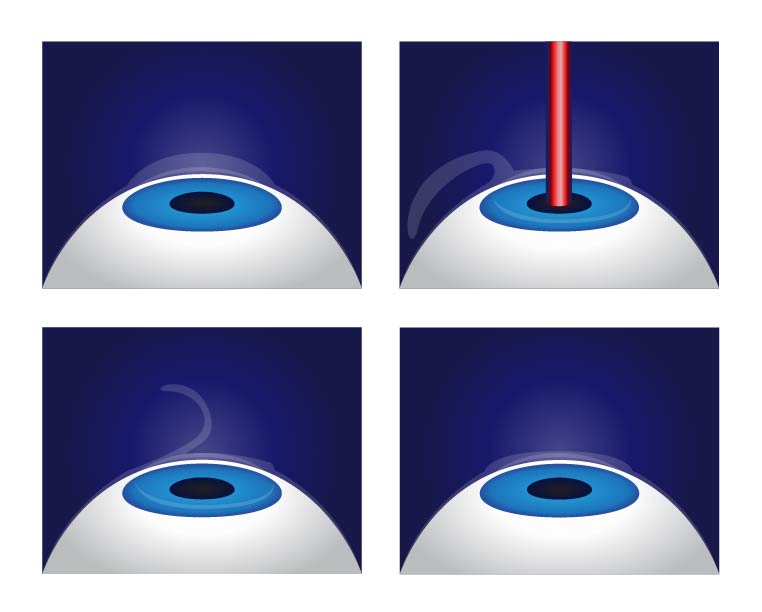 Microkeratome blades create flaps that are thinner at the center and thicker on the edges. In addition, the microkeratome blade may result in “buttonholes” in the corneal flap. In contrast, the flaps made with a femtosecond laser have a consistent thickness throughout the flap. This often results in a more precise flap creation.

The other main difference between these two methods relates to the amount of suction time required. Microkeratome blades typically require significantly less suction on they eye in order to create the flap. This can result in a more comfortable experience during your procedure. However, the discomfort caused by the longer suction time required by a laser flap subsides rather quickly after surgery.

Dr. Foulkes prefers the bladeless LASIK procedure. He feels this technology allows him to provide you with the best possible results. Some of the benefits you’ll experience with bladeless LASIK include:

In addition, the use of a femtosecond laser is much more effective for patients with irregularly shaped corneas. If you have a cornea that is too steep, too flat or unevenly shaped, a microkeratome blade has a much higher risk of flap complications. However, using a laser to create the flap in these situations will prevent the shape of your cornea from adversely impacting your results. For this reason, bladeless LASIK has significantly expanded the number of patients who are now considered suitable candidates for the procedure.

Please contact Foulkes Vision using the form on this page or call 630-724-1400 today to schedule a free LASIK consultation. We serve patients in Chicago, Lombard and throughout the surrounding areas of Illinois.

Am I a Candidate for LASIK?

Can I Get LASIK if I Have Macular Degeneration?

How is Keratoconus Treated?

Why the LASIK Eye Surgeon You Choose Matters

How Likely is a Vision Regression after LASIK?

How Soon Can I Play Sports After LASIK?

Am I a Candidate for Visian ICL?

Can Presbyopia Still Happen After LASIK?

How Soon After LASIK can I Swim?

Am I a Candidate for Visian ICL?

What is Corneal Cross-Linking and How Does it Help Eye Disease?

How Much Does LASIK Cost?

Are You a Good LASIK Candidate?

How Will PRK Surgery Work to Correct My Vision?

Will I Need Glasses after Cataract Surgery?

What to Expect after LASIK

Is There a Right Time to Get LASIK?

How Common Are LASIK Side Effects?

Corneal Cross Linking: Get the Facts

Can I Get LASIK if I’m Pregnant?

How Long has Dr. Foulkes been Performing Cataract Surgery?

What is the Difference between LASIK Surgery and PRK?

Cataracts and Your Vision

When Can I Use a Computer after LASIK?

When Should I Consider an Alternative to LASIK?

How Many Cataract Surgeries Has Dr. Foulkes Performed?

How Will KAMRA Surgery Help My Near Vision?

PRK vs. LASIK: Which Is Right For You?

LASIK vs. Visian ICL: Which is Right for Me?

What is Dr. Foulkes' Success Rate with LASIK?

Is Visian ICL Right for You?

Everyday Habits that Damage Your Vision

I Have Dry Eyes, Can LASIK Help Me?

Save Your Vision & Stay Away from These Halloween Costumes

I Have Astigmatism—Am I a Good Candidate for LASIK?

Why Millions Around the World are Going Blind

Answers to 4 of the Most Popular LASIK Questions

Quiz: Is Your Lifestyle Damaging Your Vision?

How Long Does It Take to Recover from Cataract Surgery?

7 Common Vision Problems & How to Treat Them

3 Ways LASIK Will Change Your Life

Why are UV-Protective Sunglasses So Important?

What Are Premium Lens Implants and What Are the Advantages?

How Soon Can I Do Normal Activities After LASIK Surgery?

LASIK and Cataracts: Do They Mix?

What are the Risks of KAMRA™ Surgery?

7 Reasons to Take The Plunge if You Are Considering LASIK

Can I Have LASIK Performed if I’m Pregnant?

What Alternatives are there to LASIK Eye Surgery?

Infographic - What is PRK?

QUIZ: How much do you know About LASIK?

When is it Time for Lens Implants?

How it Works: Wavefront LASIK

Why do I Need a Ride Home After LASIK Eye Surgery?

VIDEO: What Options For Near Vision Do I Have After 40?

Infographic - What is LASIK?

The Benefits of Custom LASIK Surgery

VIDEO: Is Cataract Surgery Performed on Both Eyes At Once?

Should I Use My Spring Break for LASIK?

What is a Pterygium? And What are my Treatment Options?

The 5 Primary Types of Eye Allergies

Tired of Wearing Reading Glasses? KAMRA Inlay Might be The Right Choice For You

7 Different Foods That Are Good For Your Eyes

Disclaimer: Official website of Foulkes Vision & Dr. Richard Foulkes. The information throughout this ophthalmology website is not intended to be taken as medical advice. The information provided by Foulkes Vision is intended to provide general information regarding comprehensive LASIK and eye care services for patients in the greater Chicago, IL area. If you are interested in finding out more, please contact our eye care and vision correction practice today for a personal consultation. This website is not intended for viewing or usage by European Union citizens. Read our ADA compliance disclosure.